Hello, friends!
This is a very special and personal post to satisfy all the questions we’ve received, and so I can look back and remember every detail as clearly as possible while it’s fresh in my mind, on our engagement story —

If you’ve been following on social, it happened last Tuesday October 10th, during our trip to New Orleans (yay!). It happened in the morning but we waited to post until that evening on social channels to tell all our loved ones personally first and wait on the photographer pics (more on that later). 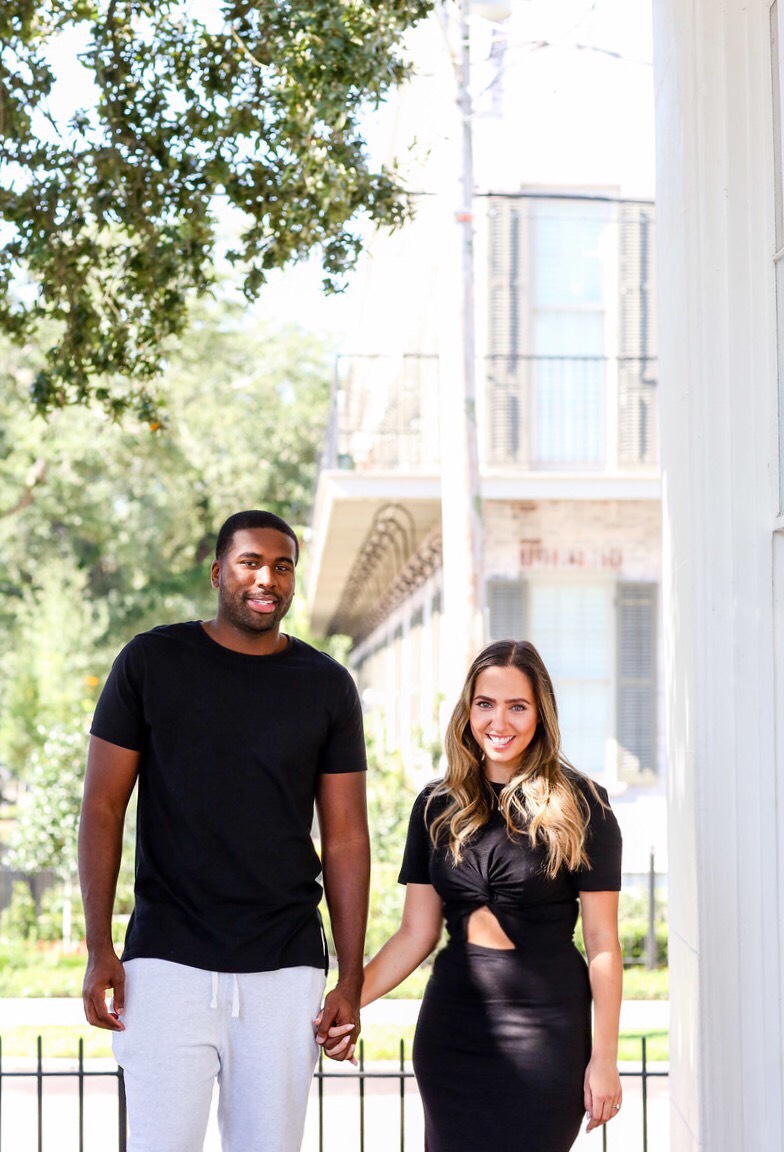 So, as all good stories start, we were waiting on our uber to go to brunch and since our hotel was absolutely gorgeous and it had been raining the day before, Ryan suggested we take a selfie. We started to snap a few pics and then this man holding a camera (at the time I thought nothing of it) said he was waiting on some friends staying at the hotel too, and offered to take one for us. For anyone that travels as a couple, you know it’s painstakingly hard to get good photos together, so I happily agreed. He stepped back and took a few on my phone, and then offered to take one using his camera and send it to us digitally. I was about to say no because hello, stranger danger (!!), but Ryan said ‘yea sure’ and waved him to go ahead.

The next thing I knew Ryan was on one knee proposing (very good form), and saying the nicest things anyone has ever said to me as I literally bawled my eyes out and somehow mustered a yes! What I didn’t know is that generous fellow who I thought was a stranger was actually there to photograph us and had caught the whole thing in real time! Ryan being the thoughtful amazing person he is had booked him to capture our engagement, knowing how much the pictures would mean to me. We had very quick introductions and then I told him I would need a minute to compose myself before any more pictures because, again, I was bawling. I think the best way to explain the feeling is overwhelmed – I was of course extremely happy, but there are so many emotions going on at once and anyone who knows me knows I am deep down the most soft-hearted cryer on the planet. 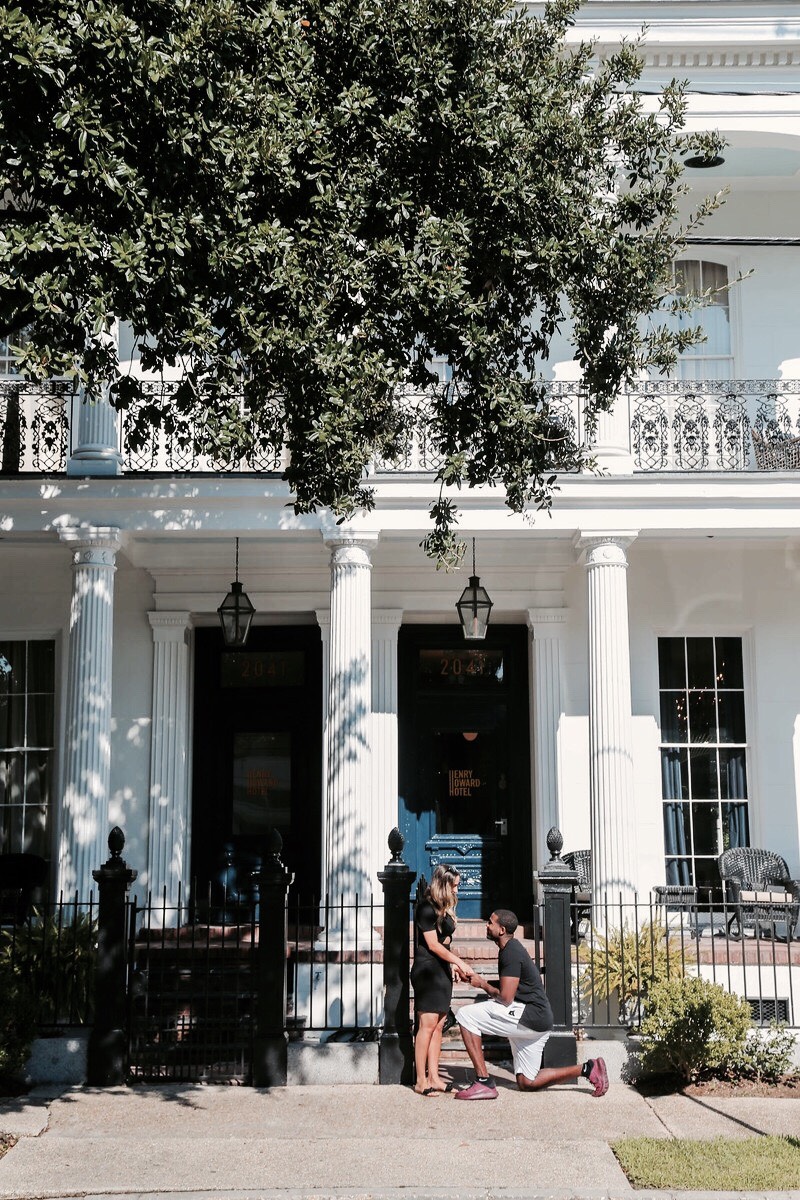 Ryan and I made a quick break to our room where I attempted to fix my makeup and grilled him with a bunch of questions – who knew?! (A: everyone on his side lol), had he asked my dad? (A: yes & he was so excited which made me cry more), how long had he had the ring? (A: way too long for me to have not found it lol), etc. etc. I then felt the need to reassure him that my tears were happy ones lol, and he said he knew but that we were on the clock so had to go take pictures!

I don’t think I’ve ever been so glad that I am not one of those people who thinks hotels are strictly just a place to crash, because the porch and lobby of the hotel lent to the most quick and easy shoot ever – not to mention our photographer Randy was truly the coolest and most talented guy. Ryan booked him through a service called Flytographer that allows you to peruse local photographer’s portfolio’s before selecting one to hire on a date and location of your choosing. I recommend it to any guy who thinks his girlfriend would appreciate a similar experience for their engagement, and I plan to use it again for other trips too – hello, bachelorette getaway! 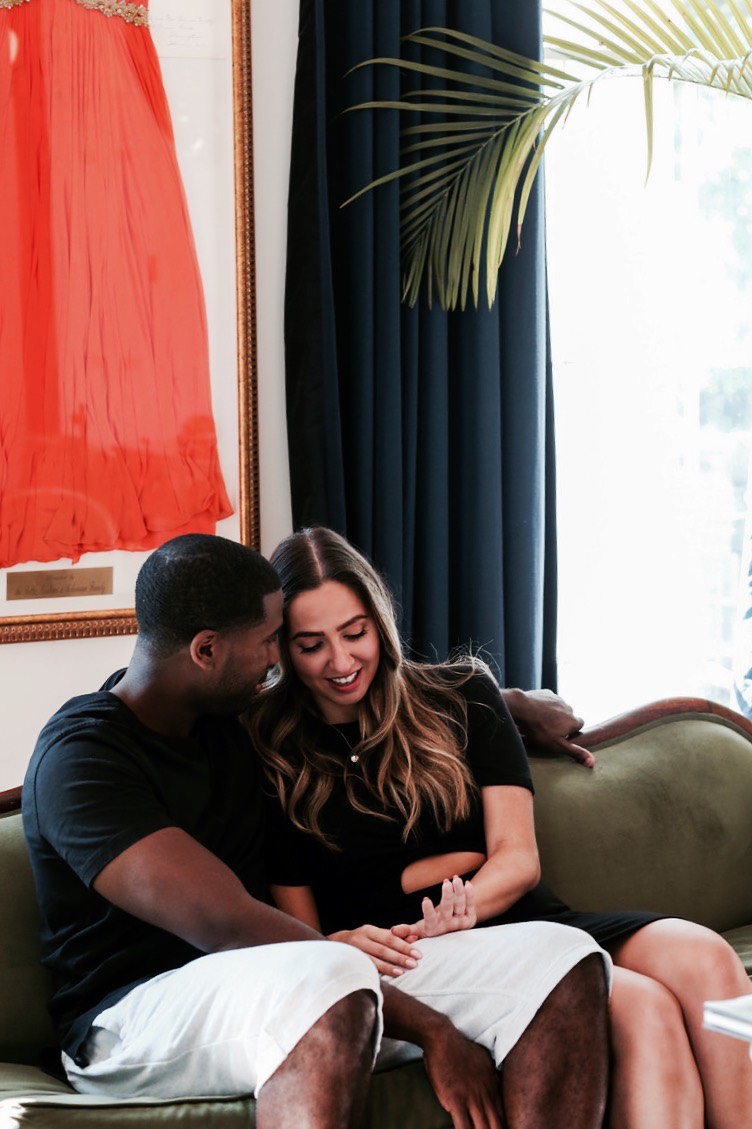 I have also gotten A LOT of questions about the ring, and I cannot explain how perfect it is to me. I wouldn’t change one thing, and Ryan absolutely nailed it. To preface this though, I will say that I trust Ryan’s judgement and he knows my style very well, but we also have had many conversations about what I like and don’t and went to try on rings about a year and a half ago. Again, I think that’s a really fun experience for couples, and am grateful for being able to see in person if what I thought I liked was in fact what I liked  (it also let Ryan know my size so the ring fits perfectly).

Ultimately, he went with a solitaire brilliant cut oval on a plain thin rose gold band with basket setting – my dream ring, simple & timeless. He had it custom made at a jeweller that he was referred to from one of our good friends, and while I don’t have nearly his knowledge in all the details, he did say one of the main factors in deciding on this jeweller was how informed/educated he made him feel throughout the process. (for example, fun fact, did you know the cut of an oval has to be very particular because naturally it can never shine like a circle or other cuts? Or that there is so much more to consider than the 4 C’s?). If you guys have other questions about the process, feel free to comment or message me on social and I’m happy to ask Ryan for help if I can’t answer myself 🙂 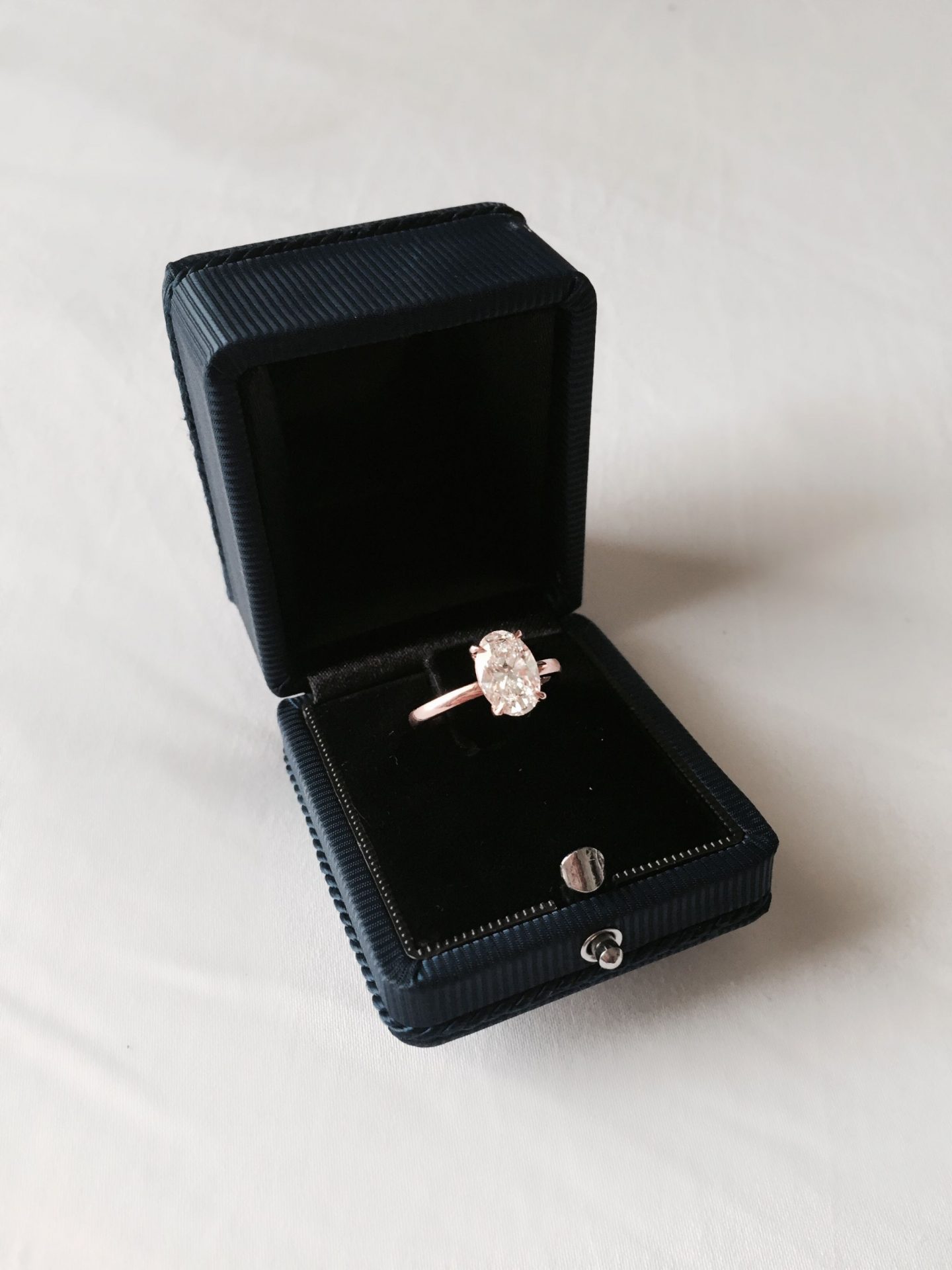 So one question about our engagement story remains though, how on earth did Ryan keep this a secret from me for MONTHS?! Especially because we live together and I am known to be quite inquisitive and suspicious lol. Well he hid the ring well (in a pocket of one of his many suit jackets in the guest bedroom closet), and his work schedule is normally all over the place so he was easily able to go to meetings without me suspecting a thing. He was also very cautious and told me he cleared all his browser history and cookies on our office computer and even his laptop (both of which I use), so that no strange ads would pop up to tip me off. We did get pulled aside at the airport and luckily I went to sit a few feet away to put my sneakers back on while Ryan told the security guard that he had my ring in his carry on and not to blow it (apparently, he had thought of that too being I get searched like a drug lord’s mistress every time we travel, and was prepared to make a scene if needed to be pulled into a private room and spare me from seeing the contents of his bag LOLOL). The man should be a criminal mastermind, I swear. 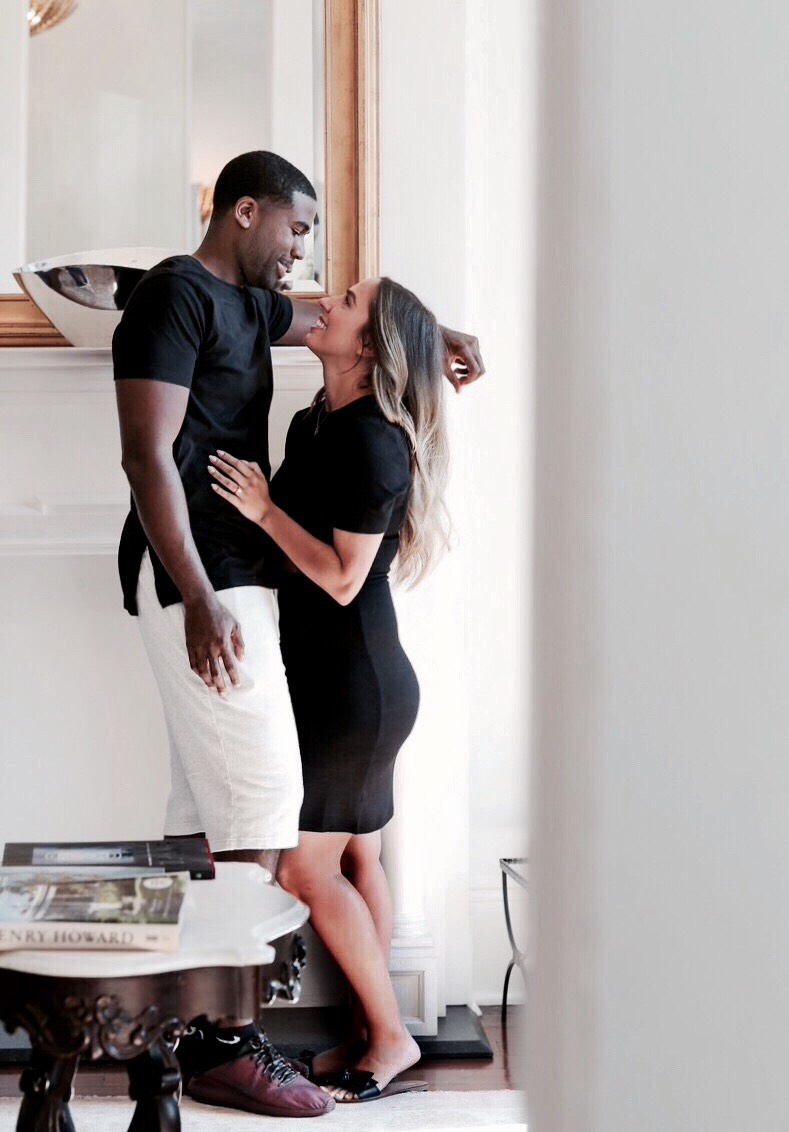 The one thing he did admit to me that he didn’t account for as a possible issue was that the day after he proposed, we walked outside and our hotel looked like Halloween threw up on it lol – I’m talking fuzzy tarantulas on the front pillars, skeletons on the porch chairs and faux tombstones all over the lawn. He told me had he gone out and seen that, with having the photographer already booked, he doesn’t know what he would have done LOL.

Truthfully though, I know we would have just laughed at it because there is nothing that could have ruined that moment for us, and I am THRILLED to spend my life with a person who consistently puts that much thought into everything he does for me/us. Ryan, if you’re reading this (which I know he is because he makes a point to read all my posts despite his lack of social media), I’m obsessed with you. 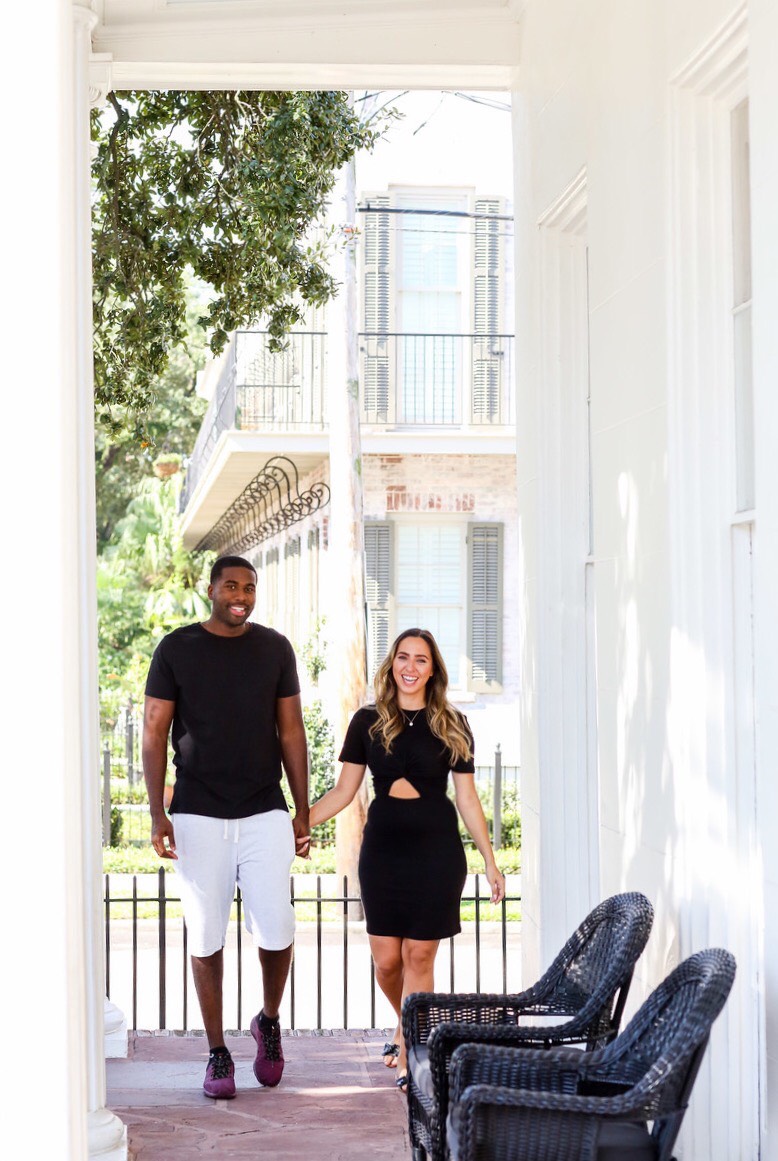 And so then like most good stories end, we went to brunch (it was at Josephine Estelle if you’re wondering), where our waiter was the first person we told the news to & when I couldn’t take the excitement anymore I called my mom and texted the girls from the table lol.

That’s all folks – I hope our engagement story gave you the warm fuzzies as it did for me & if you’d like me to continue posting wedding & planning related posts (& on what specifically) let me know in the comment section.

xx all my love,
Michelle (aka. Feyonce)